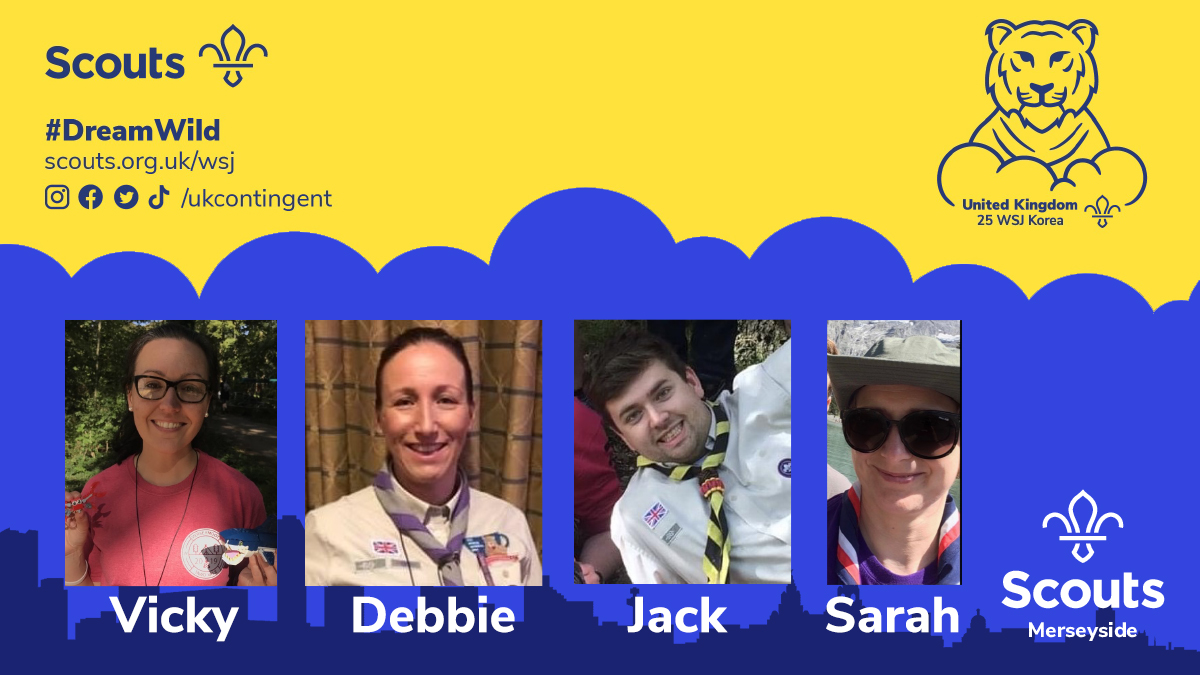 In Summer 2023, more than 40,000 Scouts from all over the world will gather in South Korea for the 25th World Scout Jamboree. We’re so proud that thousands of UK young people aged 14 to 17 and their leaders will be there as part of the UK Contingent. As part of the UK Contingent, we’ll have 36 young people and 4 Unit Leaders from Merseyside taking part in this once-in-a-lifetime experience.

We’re grateful to everyone who expressed an interest in joining Merseyside’s Unit Leadership Team. We had a strong level of interest which made it a difficult decision. However, we’re delighted to announce the following appointments:

An introduction from Vicky.

Hi everyone, I’m Vicky and I’m absolutely thrilled and honoured to have been chosen to be the Unit Leader for Merseyside Unit’s trip to the 25th World Scout Jamboree.

To let you know a little more about me, I have been involved with Scouts for more years now than I dare to mention (a scary 30+), during which time I have started my own Venture Scout Unit, gained my Queen’s Scout Award, attended St George’s Day Celebrations at Windsor and attended a Garden Party at Buckingham Palace!

From Venture Scout, to Cub Leader, then Venture Leader to Explorer Leader, I have now been involved with Explorers since it’s inception and I have kept a unit running ever since, initially as Walton on the Hill, and now Liverpool North, proudly taking on the role of District Explorer Scout Commissioner last year.

I have been taking young people camping since I was 15 years old, having attended and won the Feast of the Lanterns competition more than once and also facilitating the attendance of young people at the Mersey Moot for around 27 years. I have attended International Camps at local campsites and have travelled abroad as a leader on a Jeka holiday to Holzgau in Austria in 2003.

During my time as a leader, I have encouraged a number of Explorers and also leaders, to attend similar experiences and I am proud to have seen the major impact those experiences have had upon them. I was finally brave enough to put myself forward for such an experience when I applied for the EuroJam 2020, however the global pandemic unfortunately meant this never happened. To therefore be chosen for this experience is amazing and I can’t wait to be part of it and to see the enjoyment first-hand, particularly as I pride myself upon being able to bring the best out of young people. I really want to be a part of shaping this experience for those individuals lucky enough to attend.

I am so proud to have been chosen to be the Unit Leader and my biggest aim is to make sure that the whole unit, both leaders and young people have an amazing experience that they will never forget. Here’s to 2023, I can’t wait!!

Keep an eye on this page to find out more as plans develop.